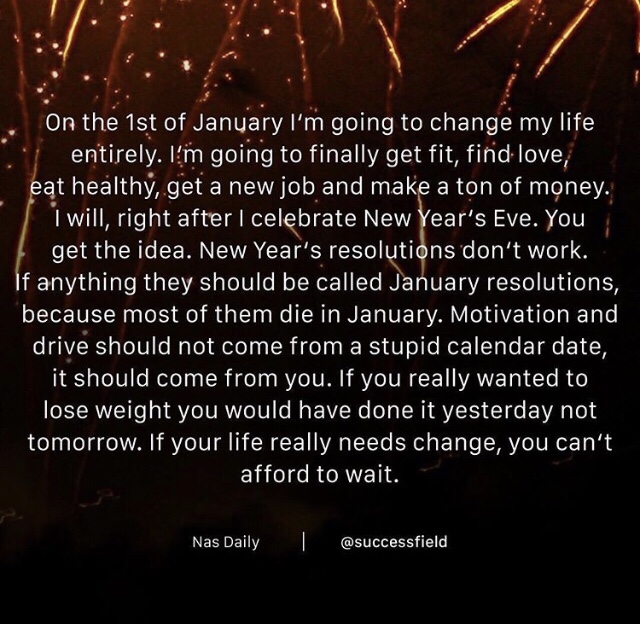 Don’t you just love my title?!?! Me too! I just wanted my first blog of the year to be about this whole New Year, New Me shit that EVERYONE does for the first couple weeks and then it disappears and we all go back to our same old miserable unhappy lives and we can’t figure out why life is so damn hard…. Not going to be me in 2018.

I personally used to do this whole New Year’s resolution garbage and I would fall off the wagon a few weeks into the year and then say fuck it, I’ll try again next year. I’m sure the same goes for most people out there. I just speak for myself now, I honestly just don’t really even care if the others fall off the wagon, no matter what their wagon happens to be. For me my new year new me garbage started months ago, MONTHS!! It just so happened that when the new year came around I was perfectly at the spot where I needed to be so that I could pull off this New Year, New Me stuff.

The problem I always had is this, I’ll try again next year, attitude. If it got hard, or I had a bad day, or what ever may have happened to give me an excuse to not follow through with my “resolutions” I always gave up. I know there was a reason for me giving up and it was because I had the mindset that I had to do it on January 1, I had to do it a certain way or at a certain time. The only window I gave myself for changing was January 1 and if I couldn’t keep up my “changing” I would just give up and go back to what I was familiar with, chaos inside my head.

When I started this journey just over a year ago I vowed to change, I vowed to do everything in my own power to become what it was someone else wanted me to be. Again I failed at this mission as it’s been a year and surprisingly enough although I am almost a completely different person in my eyes and most eyes that actually get the honor of seeing me now, I am still not what other people wanted. I know where I went wrong in that mission and how that reflects on all the other times I tried to “change” even before this journey I am on started. It went wrong because I was spending so much time trying to be what everyone else wanted, as we ALL do everyday of our lives. Just about 6 months ago, give or take a couple weeks in there I had some kind of revelation and although before then I was doing alright in my progress of change, something happened back in June that was almost like a slap in the face to me and I literally woke up. And I mean WOKE up! That may have even been when I really started writing in my blog, clearly when I go back and reread all the things I’ve posted I can see the light bulbs going off above me and how each thing I wrote about were key factors in where I am at today in my head. I’m not going to elaborate too much on what happened to wake me up as it really doesn’t matter right now or to anyone other than myself , it won’t cause anyone else to wake up as we are all on our own journey in this life. I can tell you that although I had thought several times during the last year that I was at the bottom and had no where to go but up, I seemed to keep hitting different bottoms and I wasn’t going any where.

I made a point to set some small goals, I mean small, things like not posting my life on Facebook, not telling people what it is I’m doing in my head (I blogged instead), I removed myself from almost everyone that I associated with who made excuses for me to just stay the way I was and fuck everyone else, I removed myself from almost all drama and negativity and really only talked to people who actually understood what it was I was trying to do with my head, I stopped drinking any kind of alcohol and I have been off ALL of my prescription medications since April (I was off in 2016 but kept one for fun, yes for fun, it wasn’t fun and it’s now gone), I’ve literally only taken 4 ibuprofen in 8 months. Believe me there were not very many who understood and quite a few actually got mad at me because I had boundaries set up they didn’t understand. They may have understood had I explained to them why I was putting up boundaries but I didn’t feel I needed to explain to anyone what I was doing or why I was doing it. I made a conscious decision to remove anyone and anything that caused me anxiety, stress and any kind of grief, I said those goodbyes in my head and not one person I left got any kind of explanation as to why I no longer speak to them. If they really wanted to know and they really wanted to help they would come to me and actually ask me where I went and why I no longer talk to anyone anymore. Care to take a guess how many people have asked me? NONE!!!  Not one person that I have removed from my life in the last year have bothered to come to me and ask about me, not how I am, not what I’ve been doing, nothing. It wasn’t until I deleted my Facebook app off my phone in November that I started getting questions, but I really only got a couple and it took a month to get them, all I received was why aren’t you posting on Facebook anymore? I had one person in particular, ONE person who text me with actual concern for me about why I wasn’t posting. And I told him he was an amazing human being and I would be over to tell him and his wife all about it soon. All others have been, did you see what I posted? Did you see what so and so posted? My answer is always no, I didn’t, I’m not on Facebook anymore, and those same people continue to ask me the same questions. Now I don’t even respond because if they can’t listen to me long enough to hear, I’M NOT ON FACEBOOK ANYMORE, there really isn’t any point in reexplaining myself.

My progress has been very slow and there has been A LOT of self talk reminding myself that I am trying to reprogram a 43 year old mind, so patience has been something I have learned and continue to learn. Continuously reminding myself that no one else is like me has helped a ton as well, so has letting go of the fact that because no one is like me I don’t have to be so affected by those around me that I don’t want to be involved with, I no longer care what anyone does with their own lives. I could actually care less what anyone does anymore as long as it doesn’t hurt me or anyone else. I REALLY DON’T CARE! Makes me sound like an asshole I know, well if I get called an asshole because I don’t care why you do the things you do then call me an asshole, I only worry about what it is I am doing, as we all should. I have found a new sense of freedom in the last week, I don’t really know why, I haven’t really looked into it but I do know that because I have isolated myself and spent many, many hours writing, reading and listening to meditations and not getting myself involved in any kind of drama whatsoever and removing myself from Facebook has made the biggest impact that I could possibly imagine. The other big thing I have done is to practice what I preach! Man that was a doozy to learn, let me tell you! I wrote about that last month. (Click here to read it Are You Walking or Talking? ) I have watched so many people throughout my life talk such a big game and have nothing to back it up, no action, everyone seems to just be smooth talkers in this age, more so than 20 years ago, or maybe I am just more aware now. I have a Bullshit radar that I have always had that goes off constantly now and instead of ignoring it and letting others smooth talk their way into manipulating me, I now either call them out or I just walk away with my head up, instead of my head down in shame because I was manipulated yet again. The saddest part of my journey over the last year is that I lost the one person that I thought would always be there for me. No explanation from them, no apologies, no anything. I think that was the actual turning point for me and the moment that I decided I would settle for no less than what I deserve and I deserve to make myself happy instead of trying to fit in with society and all the bullshit that goes along with it.

I have this really cool bubble around me now that keeps all negativity and guilt away from me and somehow now it works. I tried for years to put a bubble around me and always it would burst. The last week, I have had more than a handful of instances that would have normally burst my bubble of protection and somehow it didn’t break! In fact it’s so strong now that I can’t even use any examples of the shit that has happened this last week because I was so unaware of the bullshit that I can’t even remember it. I’ve tried to tell people a little about it but my story sounds dumb because all the drama of the story isn’t there. What a great feeling it is to not be ruled by some kind of drama. Don’t get me wrong it’s still there like always but it’s not mine anymore and I choose to put my blinders on and walk away.

The moral of my story is your new year new me garbage can start the moment you choose to start it and it really just comes down to you. The decision to take accountability for yourself, what you do, how you act and how you reflect on yourself to improve what you want to change within yourself. It has nothing to do with what others want or what others tell you is wrong about you unless you are hurting them in some way. Which is a fine line as you cannot control how others feel you can just control what you do and say. This is why I am even more quiet than I used to be and why I am very picky with who gets to know me now. My life is my life and it’s not really for anyone to judge but me and if someone truly has a problem with what you are doing they should probably come talk to you about it. Otherwise it’s really only their problem, not mine.

I am no professional I am just journaling my story as I have always wanted to in hopes that maybe just maybe someone will get it and try it and they too will be able to change their life. Feel free to comment, question and share what I write.

This site uses Akismet to reduce spam. Learn how your comment data is processed.